Rittenhouse is changing history with sleeper agents, Flynn’s back (briefly), Jiya’s condition is getting worse, Wendell Scott is your new favorite NASCAR driver, oh, and Lyatt have a beautiful moment of vulnerability in the trunk of a car that’s so soft, so full of trust and love, you possibly didn’t survive it. 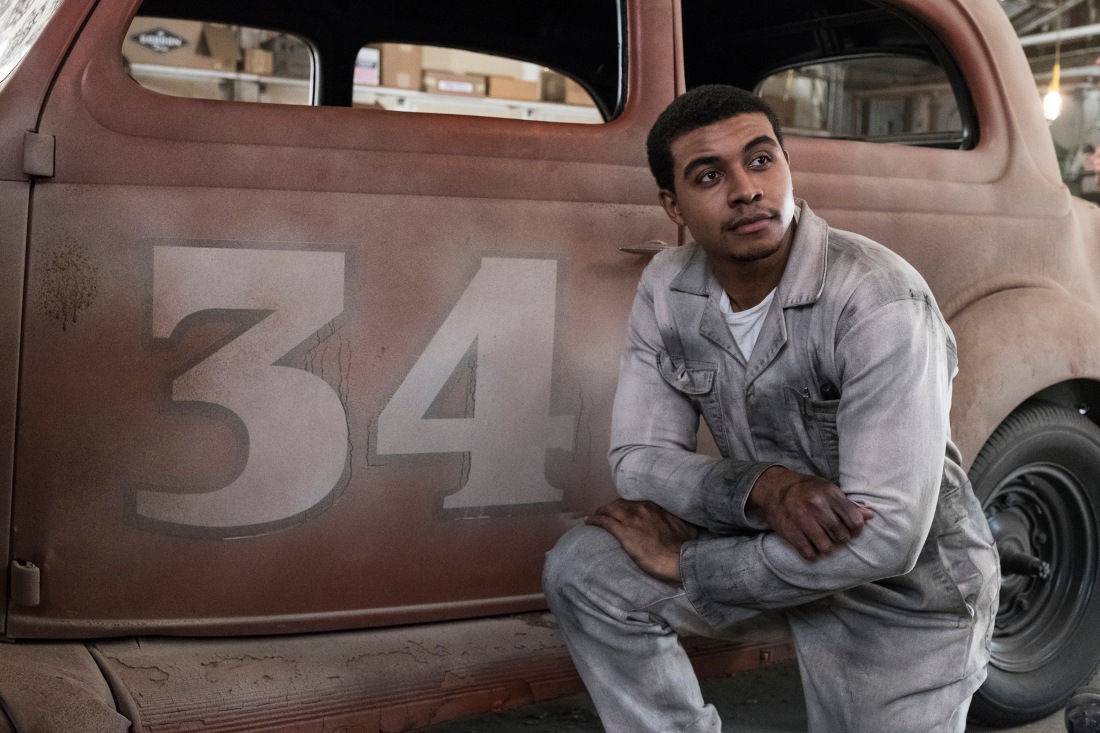 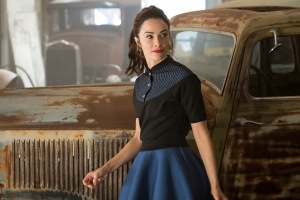 After last week’s almost kiss, Wyatt and Lucy’s relationship continues to progress. He’s been thinking about Lucy’s six weeks with Rittenhouse and is concerned for her. It comes out as he sits with her and summons the courage to ask what happened. Jiya has mentioned to him that Lucy’s not sleeping, answering our questions about who’s bunking with whom.
Lucy’s not ready to talk about it. I wonder if these will be confessions that come out during a confrontation with Carol in a later episode. Or perhaps we’ll never know, but I do hope what went on during those six weeks will be spoken of sometime this season.

Needing information on why the mothership’s touched down in nowhere, South Carolina, Lucy suggests they use Flynn’s knowledge.

WYATT: “Hate does not begin to touch how I feel about that idea. Number one, he’s a psycho. Number two, he’s a total psycho. And number three he thinks he’s in jail cuz we set him up.”

Despite Wyatt’s outburst, Flynn gets to play more of a role this week. Garcy fans, rejoice. Our favorite loveable villain is back, and he’s only interested in working with Lucy. He has his own agenda, of course. The idea of rotting in jail and not being able to avenge the murder of his wife and daughter makes him more willing to offer information. 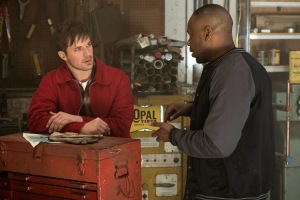 Wyatt shows off his own historical knowledge, schooling everyone on NASCAR history. His “stone-cold nerd” side comes out as he fanboys first over the cars in 1955, and then over the drivers.
This is a strong Wyatt episode. Here, we learn about his youth. How he was a bootlegger, running drugs across the border when he was fifteen. The team’s at a bit of a loss as to how this information’ has never come up before.
“You guys never asked,” Wyatt says, blowing off their surprise as flippantly as possible.
He doesn’t want them to see who he was before, he only wants them to see who he is now, since he joined the team and they changed him.

Lucy’s, “No, no, not toward the fighting” is brilliant. It’s a fun line, delivered wonderfully by Abigail Spencer. It gets better, as Wyatt fanboys over Wendell Scott. Her facial expressions are perfection. She’s ready to verbally rein in Wyatt’s squee, but she restrains herself. And Lucy taking the moonshine off Wyatt might be one of my favorite scenes ever (or maybe that honor’s going to a scene a little later…).
“Come on, fanboy,” Lucy says. It’s nice seeing Wyatt happy though.

Rittenhouse continues to be a nasty piece of work. I’m starting to believe only sociopaths can become members.
How they’re changing people’s memories is disturbing. Wyatt remembers having posters of Ryan Millerson up on his walls as a kid – except, that’s not a memory that Wyatt’s always had. Because Millerson’s from 2018; he was dropped into 1946 by Rittenhouse as a sleeper agent.
“All the memories you have of him, are new,” Rufus tells Wyatt, making our blood run cold with the idea of that.

“This is simultaneously giving me a headache and a panic attack.”

Emma’s confusing to me. Why did she choose to work her way up through the Rittenhouse ranks? Why is Rittenhouse so important to her? When did she join them? Before joining Mason Industries, or was she recruited during her time there? I hope answers will come in time, like they did with Flynn. What convinced her to spend a decade in the 1800s, assuming the plan all along was for Lucy to write about it, and Flynn to bring her back to the present?
There’s still a lot about that I don’t even pretend to understand.

And is there actually a hint of sanity, decency, humanity, in Emma as she watches Ryan with his wife?
“Carry out your mission or she dies,” she tells him.
Maybe not. 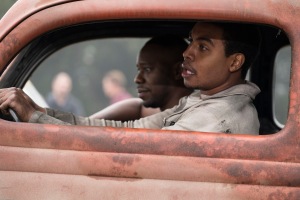 Wendell Scott is the real hero of this episode. The first African-American NASCAR driver, who offers moonshine to Wyatt, throws a smoke bomb to save the team, gets them away from the track, and then later smuggles them back in.

Poor Rufus just wants to help Wendell with his car. Just wants to connect, like Wyatt so easily did. It’s while attempting to fix his engine that Rufus burns his arm – like Jiya had seen because Jiya’s visions are of Rufus’ future, in the past. Did you get that?
Earlier in the episode, while handing Rufus a tool, she sees a burn appear and spread up his arm. During this, she doesn’t pass out, as she has done previously. Does this mean her condition is changing? And why can she see events that are going to happen to Rufus in the future. In the past.
Like Lucy earlier, this is simultaneously giving me a headache and a panic attack. 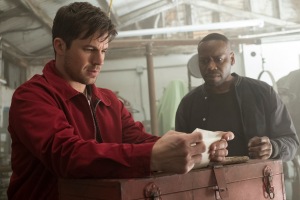 Wyatt regains Wendell’s trust by helping to fix his car, during which more back story comes out. And if Wyatt didn’t break your heart before, this will.
In Party at Castle Varlar it was clear his father wasn’t going to win any Dad of the Year award. Here, we learn more. How his father used to beat him, how he’d sit, drinking and smoking, laughing while his son fixed the car. Until, at fifteen, unable to take it anymore, Wyatt stole that car and drove it into a lake.
His face when Lucy and Rufus overhear this story is something else. He’s so guarded around them when it comes to his past that he struggles to make eye-contact with them after they hear his story.
He’s ashamed of who he was. That’s not the man he wants them to know.

To get the team back to the track, Rufus rides up front, while Lucy and Wyatt are tucked away in a hidden compartment in the trunk.
There’s a call-back to Lucy’s claustrophobia as she tries to breathe through her distress. Wyatt teases her, getting closer, right in her face, and it takes the edge off her fear, but as they get bounced around she struggles with it. Wyatt, the gentleman, manoeuvres them until she’s holding on to him, in his arms.
These two do some of their best talking when in stressful, or close, situations, like Party at Castle Varlar, and Last Ride of Bonnie and Clyde. Here, alone, Lucy can ask him about his dad. She’s thinking a lot about her mother, and Wyatt has some raw memories of his dad, but he can still joke about it, still help Lucy through her own pain. He holds he during this conversation and makes her smile.
The tension is palpable as the car gets to the track, and the man at the gate order Wendell to open his trunk. Lucy and Wyatt tense, preparing to be discovered, but they’re tucked away in the hidden compartment and all is fine.

What’s giving me ALL the lyatt feels here is how much closer they are during this scene. Wyatt is one-hundred-percent ready to protect her should they be found, and his body is basically shielding hers while they wait.

The car drives forward again and both are bounced around in the trunk, and it’s adorable as they laugh. And then the awkward amusement turns to something else…
Lucy zeroes in on his lips, Wyatt shifts position. There’s face touching that’s so soft and sweet if I wasn’t shipping these two I would be now. The trust these two have built, the bond, is the reason this is my favorite ship on TV right now. Maybe ever.
Right before their lips meet, the compartment is opened – to find Wendell and Rufus standing there, Rufus scratching his head awkwardly, Wendell just amused. Like in fanfic, poor Rufus has to see something he probably wishes he hadn’t.

I am lyatt trash for this scene. HIS RED JACKET IS UNDER LUCY. He put it down for her to lie on. THE FEELS ARE REAL. Meanwhile he’s lying ON HER. AND LOOK AT HIS SMILE.

These two have some serious UST to sort out.

Speaking of, notice the scene where the gang watches the track from their hiding spot, notice how Lucy and Wyatt have Rufus and Wendell between them? Ten bucks says that because if they were standing beside one another then they’d start making out. 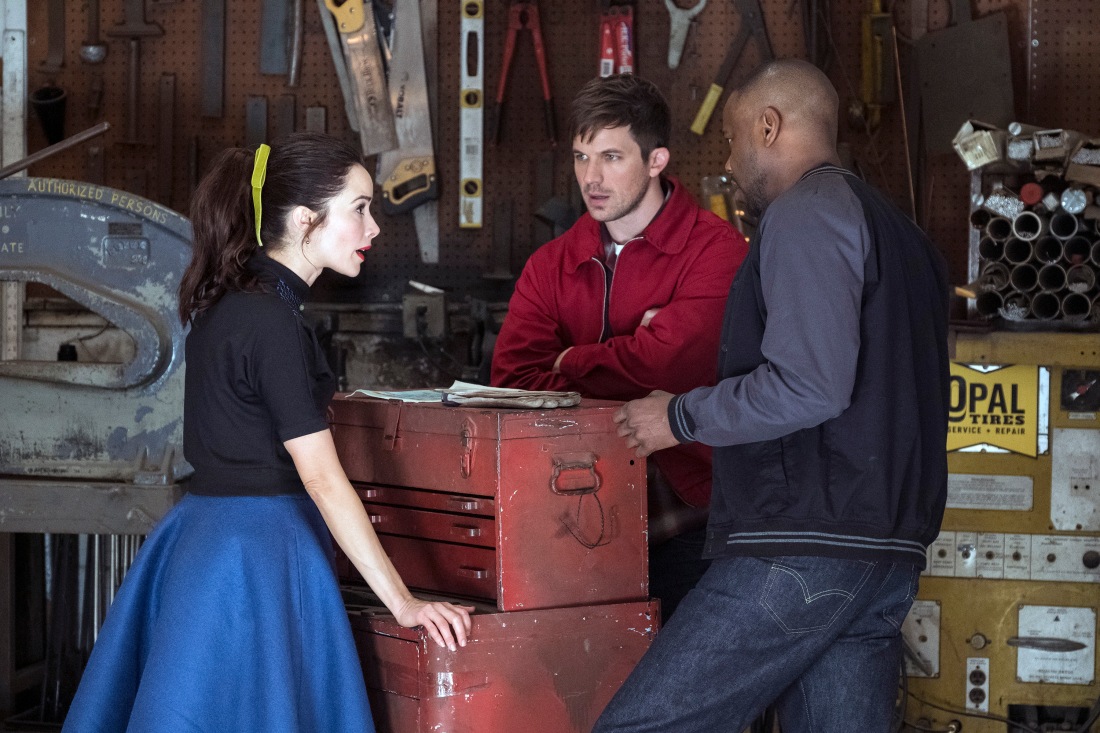 Wyatt and cars. Let’s talk about that again. Look at him, fifteen again, running from the cops.
In “Lucille”, just by the way.
Despite Lucy and Rufus’ concerns, Wyatt skillfully drives the car into Wendell’s garage, and I think in future they won’t question his driving skills.

Wyatt’s red jacket makes another appearance, this time draped around Lucy’s shoulders.
She looks comfortable in it. She might be stealing that back in the present.

Agent Christopher is fierce as she forbids Connor from making any public appearances. He just wants to reclaim his name. He’s lost everything that made him who he was. This is not easy for him and Agent Christopher is making it harder.
No one is unaffected by Rittenhouse, and Mason is paying now for his own involvement with them in season one – but that doesn’t make it easier to watch. He’s not going to be the man he was, at least not anytime soon. Maybe not ever again. He needs to start working towards acceptance, that he’ll be someone else, and that’s okay. He can still survive.
He may even end up a better person for it. Once he stops being selfish.

Keynes is dangerous, and while he and Emma are going to get along smashingly (maybe too well? Is there a possible ship here?), I think Carol’s starting to have some Rittenhouse doubts. She was born into it, and becoming part of it was never a choice for her. I wonder how brainwashed she was by her own parents?
In the final scene with Keynes’ artwork, I think she’s starting to see the flaws in Rittenhouse’s quest for perfection.

I considered maybe Carol would lose her life before the end of the season, now I think she might just switch sides… 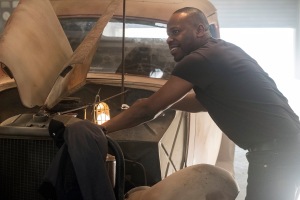 Did you love The Darlington 500? Are you freaking out over Jiya’s visions and what this means for Rufus? Is NASCAR your new favorite sport? Is Wendell Scott your new favorite driver? Do you just want to wrap Wyatt up in a giant bear hug and never  let him go?
Are you even still alive after those lyatt feels?